$9 advance.  $15 at the door. Recovery Night Concert featuring Singer/Songwriters, Larry Ahearn, Suzanne Lavine and Maxie Mandel.  Whether you are in recovery or just want to enjoy good live music in a drug and alcohol-free setting, join us for this very special evening.

NO ALCOHOL PERMITTED AT THIS EVENT.

Larry Ahearn landed at Villanova University and immediately began working at the nearby Main Point in Bryn Mawr, PA. For 11 years he was an integral part of all aspects of Main Point operations, booking promoting and producing many of the now legendary shows that took place at the Main Point in its “golden years.” Throughout that period he also began to write and perform his own music as a solo artist, and later, with the Larry Ahearn Group (Tom Crosthwaite, Bill Cannon, Bill Shultz, Chris Shannahan, Dan Rossi). He has shared the bill with artists like Tom Rush, Jimmy Buffett, Livingston Taylor, Jaime Brockett, Janis Ian, Elvin Bishop, Velvet Underground, Sha Na Na, Spider John Koerner, Eric Andersen, Good News, Blood,Sweat & Tears, Pearls Before Swine and John Prine. After years of booking, promoting and producing music, sports and theatre, most notably as a team member with the worldwide Concerts For Human Rights tour with Bruce Springsteen, Sting, Peter Gabriel, Youssou N’Dour and Tracy Chapman, Larry found himself in China in 2004/5 with the Harlem Globetrotters. He’s back in the U.S.A now and has returned to his first love: writing and performing songs in an intimate atmosphere – Full Circle. Larry also manages Craig Bickhardt, an extraordinary performing songwriter whose credits are too numerous to mention here and now works with Trespass Music www.trespassmusic.org

Suzanne Lavine is a singer/songwriter based in Ardmore, PA. She writes 60s jangle pop songs influenced by the Beatles, R.E.M. and The Byrds.  After an absence of 25 years from the music scene, Suzanne made her reappearance with her group The Vines from the 80s, as they reunited for a few shows. Inspired and rejuvenated, she began writing tunes for what became Crystal Clear, a six-song EP which was released on Saturday May 4th, 2019. Following the formula she used back in the day, she created the same catchy, heartfelt jangle pop influenced by the Beatles, R.E.M. and The Byrds that she was always known for. After producing demos with singer/producer Hayley Cass, she began gathering musicians for the record. Starting with longtime friend, former bandmate and bassist Marc Seligman, she then added drummer Seth Baer of the Ben Vaughn Quintet. The three went to London Sound Studios in Cherry Hill, where Harris London recorded the basic tracks. Using her Hoboken days connections, Suzanne then reached out to vocalists Deena Shoshkes and Jon Fried, who she knew from the power pop band The Cucumbers, and now with The Campfire Flies. From Suzanne’s Philly connections, she was able to wrangle local legend Cliff Hillis, who added guitar, keyboards and backup vocals, as well as mixing/mastering services from his studio The Hacienda, in Phoenixville, PA.

Maxie Mandel is a 15-year-old singer-songwriter from Bryn Mawr, PA who lets her life flow through her music. An emotional, pure powerhouse vocalist, she plays piano and guitar to write and arrange contemporary songs that transcend any one particular genre. Maxie sounds like Maxie in her natural element.  Maxie featured in Main Line Today magazine’s “Next Gen: 15 Local Leaders Under the Age of 30” for her musical community service work. She is the founder of Maxie’s Hot Chocolate House, an annual Main Line teen concert event that benefits LiveConnections at World Café Live. One of her songs written for Brandon’s Voice advocates for autism awareness, and another is slated to benefit teen cancer. Lately, she has been performing her originals to benefit local organizations with missions that resonate with her lyrics.
Maxie was recognized as a top five Pop finalist in Philly’s 2019 PHL LIVE Center Stage Competition, and won the 2018 Meridee Winters Music School Teen Song Contest. She performs at open mics and venues including The Bryn Mawr Twilight Concert Series, South West Wayne Porchfest, Philadelphia Area Songwriters Alliance and Philadelphia Folksong Society. 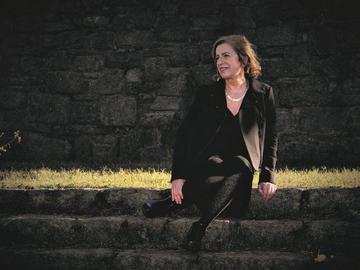