$15 online.  $20 door.  Matt Santry wants you to know that someone’s been there too. His aim as a singer songwriter is to write songs that welcome you into an experience he calls “heart driven pop”.  Jeff Campbell’s onstage experiences have taken him to coast to coast countless times and found him sharing stages with John Mayer, members of Counting Crows, The Grateful Dead, and opening for Train.

Matt didn’t always write songs. He began his professional career as a social worker. While working with children with Autism, he started using music in an intuitive way. “Whether we’d bang on a drum or sing a song or I would just play the guitar, music was part of every day.”

Then one moment changed the way Matt looked at music. His client, who rarely used words to communicate, sang an entire Christmas song, line for line, by himself. In awe of this interaction, Matt was inspired to begin writing his own songs.

10 years later, Matt continues to search for that human connection through his own music. His journey has taken him across the country performing at over 100 colleges, on festivals bills with the acts like The Lumineers and Counting Crows, sharing stages with Delta Rae, Brent Young, Tony Lucca to name a few.

You may have heard Matt’s voice before and not realized it. Besides performing his own songs, his voice has been featured in numerous national ad campaigns, from a singing cowboy in a Febreze commercial to backing Adam Levine and Blake Shelton in The Voice, Season 14 “Porch Commercial” which debuted on Super Bowl LLI.

In May of 2018, Matt released his newest EP titled “In The Moment”. Produced by Alex Wong, (Delta Rae, Ari Hest, Vienna Teng). The EP debuted on Billboard’s Heatseekers chart the week it was released.

After being crowned winner of Guitar Center's National Singer Songwriter Competition out of over 13,000 entrants,  his 2013 EP Release, “In Spite of Everything”, produced by 6x Grammy Winner John Shanks, premiered at #1 on the iTunes rock EPs and singles charts, following a performance on the Jimmy Kimmel Live! show. His 2015 followup “The Kitchen Sink” followed and the release, along with almost 2 years of touring, were received with positive reviews.

The years following have seen the release of 2015’s self-produced, “The Kitchen Sink”, as well a collaborative set of co-write singles with Tesla guitarist Dave Rude, and a 2017 release as Static and Surrender with venerable Bay Area rock staples, brothers Adam & John Schuman (the Trophy Fire, Cold Hot Crash), all of which were supported with extensive touring and great crowds, proving that Campbell’s support network is full of fans that still hold live music close to their hearts.

Above all else, Jeff loves to tell stories, both through and between songs at his live shows, often calling himself on talking more than he sings. 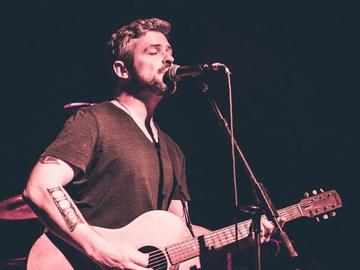